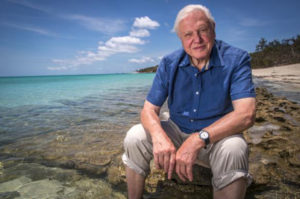 We’ve selected 10 epic and educational nature documentaries to help you break away from CoVid and quarantine. As you dive into the natural world, it may occur to you that the current inertia of human activity offers us the chance to re-evaluate our impact on the planet we share with millions of other organisms. Fully awakening to the fact that we need to restructure our way of doing things and rebuild our relationship with the natural world may just be the silver lining to this crisis. These provocative documentaries are sure to give you a new perspective. Seize this opportunity to consider a new way of life; one in which we commit to respect and co-exist with the weird and wonderful creatures of this world.

This series takes you on a journey revealing the unique character and life forms of our seven continents. It brings to life the climate, terrain, fauna and flora that evolved over millions of years, and takes you to corners of the planet never explored before. Through spectacular imagery, the BBC team captures enduring wonders that surpass the imagination. And what better way to weather isolation than in the company of Sir David Attenborough and his comforting narration?

A provocative and controversial documentary that questions our views and ethics on animals in captivity used for entertainment. Blackfish follows the story of Tilikum, an orca captive in SeaWorld, and discusses the concerns and eco-politics surrounding this species. Created to challenge our perspectives on the relationships between humans and animals, this documentary does not fall short in ensuring that the audience is kept on their thinking toes.

Set in the Congo’s Virunga National Park, this film investigates the extreme pressures faced by the world’s last mountain gorillas, from war and poaching to industrialisation and habitat loss. Virunga’s plight is shared through the stories of four rangers fighting for conservation and a journalist’s determination to tell the truth about the threats faced by these magnificent animals. The film highlights the complex political, economic and social issues that complicate the efforts of environmental conservation.

Drawing from National Geographic archives stretching back 50 years, this heartwarming documentary introduces Jane Goodall as a young primatologist and includes footage never-seen-before recorded during her fieldwork in Gombe Stream National Park, Tanzania. JANE challenges the male-dominated scientific world, acknowledging and celebrating her dedicated mission to understand chimpanzees. The film beautifully shares Dr. Goodall’s sincere and intimate passion, and invites the audience into her world through curiosity and knowledge.

Through striking visuals this film interrogates the progressive dissociation and isolation between humanity and other species on our planet. How do we wish to continue living and interacting with other species? How did we evolve to become so unconscious of Nature whilst our very survival depends on it? Rather than trying to discourage you, Terra highlights the opportunity for humanity to nurture once again the relationship with the natural wonders of our shared home.

This exposé traces the complex web of illicit operations responsible for the killing of thousands of African elephants. Ivory, regarded as a status symbol in China, is a commodity steeped in corruption and greed. Deep undercover tactics were employed to uncover the truth of the organised crime syndicates robbing us of our wildlife. Journalists and crew involved in the making of this film risked their lives as they navigated the black market and its shadowy figures. A brave project that confronts a daunting reality requiring immediate action.

Similar to Seven Worlds, this documentary series celebrates the biodiversity of our planet. The narration of Our Planet is delivered through emotionally sung lyrics to achieve a significantly unique effect. Viewers are urgently reminded that our natural world is threatened by reckless actions. Sir David Attenborough shares his concern and discomfort to appeal to the heart of the audience. That’s not to say that this series is depressing or unenjoyable. Instead, it shakes us out of our naivety and calls us to action.

It’s so easy to ignore our impact when we cannot immediately see it. Whilst terrestrial problems are obvious, marine impacts can be almost invisible. Chasing Coral offers viewers an opportunity to visualise the coral reefs vanishing at an exponential rate. Submerged in a reality of our own making, this film showcases the changes of the ecosystem recorded daily by marine scientists. Follow a team of divers, photographers and researchers as they provide clarity on phenomena like coral bleaching and, more importantly, the critical ecological role of coral reefs across the planet.

Environmental photographer James Balog admirably combines skill and passion to convey a message that could change the world. In Chasing Ice, we follow his expeditions to Greenland, Iceland and Alaska to capture the disappearance of ancient, giant glaciers. Initially skeptical about climate change himself, Balog invites us into awareness of the dangers facing our glaciers, and ultimately the planet, through his striking photography.

Ever wondered what animals get up to after dark? If you’re looking for a unique cinematographic experience, then Night on Earth is sure to impress you. Using ground-breaking technology, this new release features exceptional footage of nocturnal creatures. Night on Earth offers a different take on wildlife documentaries and explores various habitats from the savanna to the desert.

Your feedback is valuable for us. Your email will not be published.
Cancel Reply

Campfire Academy
From ONE DAY to DAY 1